Abu Garcia Reels come from a company that has long been established as experts in small gear precision mechanics.  Originally founded as a precision watch maker, their attention to detail made ABU watches prize possessions.  Their company, AB Urfabriken opened their doors as a watch factory in 1921 in Svangsta, Sweden.  AB Urfabriken built their reputation because generations of Swedish Craftsmen designed and built watches and then ABU reels to deliver superior performance the first time and every time -   Abu Garcia "For Life™".

Abu Garcia Fishing Reels were not always called Abu Garcia. That did not occur until ABU was merged with the Garcia Distributor in the USA. Check out this and other milestones in the ABU Garcia Fishing Reel family list below: (extracted from the company website) Anglers the world over have learned to put their trust in Abu Garcia reels that stand up to their toughest tests. A Good first bait caster is the ambassadeur fishing reel because of their: Strength, smoothness, and reliability. Abu began building reels to meet exacting smoothness and durability tests built right the first time. This has earned them the trust they deserve.

Abumatic spincast reels offer ultra reliable and simple to use reels for the novice and experienced anglers alike. These reels were some of the first reels I used for fishing which is why I reference them here. As an Amazon Associate I earn from qualifying purchases. They are available in six models: Since the introduction of Abumatic in 1956, Abu Garcia has continually sought to upgrade these reels, making them smoother, stronger and more reliable.

Round Abu Garcia Reels - known as Ambassadeur Reels - were introduced in 1952 and have been a standard around which many other round baitcasting reels have been compared. Precision gears were utilized to build strong, durable and smooth operating reels. Abu Garcia Line Counting Reels can bring real precision to your trolling. You are easily able to let out the same amount of line for each pass you make. If you need to go deeper you can simply let out additional line the next pass. The name Ambassadeur has come to mean excellence to anglers around the world. Ambassadeur fishing reels are available in 3 models: 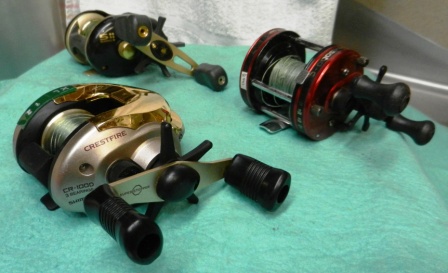 Abu Garcia offers three families of low profile bait casting reels: The Max, Orra and the really strong and light Revo® Series. The MGX packs in all of their latest features for the ultimate fishing experience. Low profile baitcast reels are designed to provide comfort in a reel that conforms to your hand and wrist through ergonomics. They have designed these reels to respond to your aggressive techniques, strong enough for your power fishing, and to deliver pinpoint accuracy with your needed distances required by the more experienced sports enthusiast.

Abu Garcia established itself as a world class watch maker - developing expertise in precision gears, that were smooth operating and long lasting. It was a natural step to develop world class operating fishing reels, spinning, spincast and bait casting reels. Whatever your fishing passion is, Abu Garcia Reels can meet your needs.

Back to Abu Garcia Reels