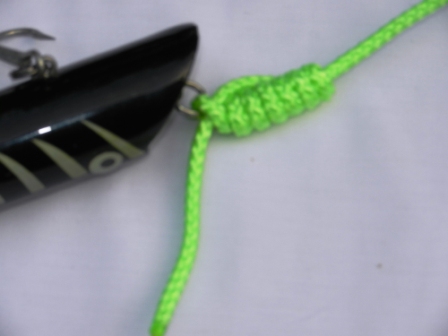 The clinch knot is one of the easiest to tie and a very versatile fishing knot.  It is also easy to teach others who might be fishing for the first time.  It can be used with single hooks, lures, swivels and snap swivels.  This knot works best with monofilament type lines and is less useful with the new braided lines.  While this knot is strong if you have an application where you desire an even stronger knot check out the Palomar knot.

There are many terms used when describing tying fishing knots, marine knots, and other types of knots. Two words I will use in the descriptions of my favorite knots will be The working end is the end of the rope or fishing string that you are actually working with. You are usually not working with both ends of the fishing line. When tying your shoes you are in reality working with both ends of your shoe string so both ends would be considered working ends. With fishing line you normally have one end you are working with and the other end is usually fastened to the arbor, hook or lure. The standing end is the end of the line tied to the arbor. The standing part is the part of the line from the standing end to the knot. Remember these definitions when reviewing how to tie my 10 favorite knots.

When beginning to learn to tie fishing knots, you will need to learn to leave enough extra line on your working end to finish the knot.  With practice you will learn to estimate this very closely.   As you progress through tying the knot you will quickly learn to tell if you will run out of line on your working end.  Sometimes you will need to just start over because you will not have started with enough extra line on the working end to finish the knot.  The rope used in these pictures is of course much bigger than fishing line -  as a result the knots in these pictures are much bigger than you will make with your fishing line..  When done tying any knot trim any excess line on the working end so that it will not be in the way.

As an Amazon Associate we earn from qualifying purchases.   Recommended items have been personally owned, tested or we have fished with anglers who were using them.

The Complete Book of Fishing Knots, Leaders, and Lines

The first step in tying your clinch knot is to pass the working end of your line through the eye of the hook or your lure as shown in the picture above.  Leave enough extra line on the working end to be able to make several loops around the standing part of your line. 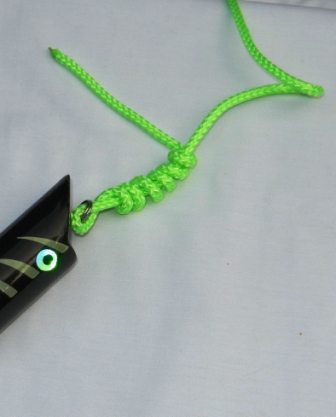 In the second step you will pass the working end over and around the standing part forming 8 loops.  Keep your eye on the opening that remains near the hook eye or the lure where your initial loop was formed. 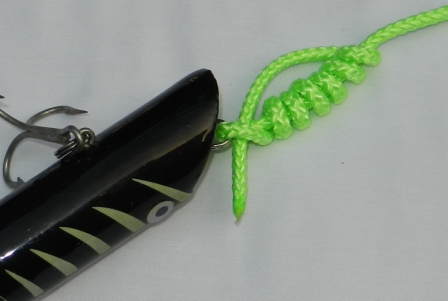 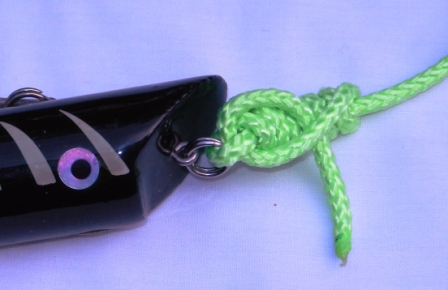 This improved  knot has one additional step to those you just accomplished.  As seen in the picture above you pass the working end through the last loop formed when you passed that same end through the opening just above the eye of your hook or lure.

Back to Tying Fishing Knots from Clinch Knot