If you are thinking about a northern pike fishing trip you are in for a real treat.  Giant northern pike are aggressive and some say even appear to be angry when you catch them.  The encounter is sure to create memories and the northern pike pictures you take will make those memories last for a long time.  There are certain patterns to catch more pike and less walleye, but honestly, no matter how you are fishing in northern waters - or waters anywhere there are pike, you may just find this powerful and feisty fish on your line. 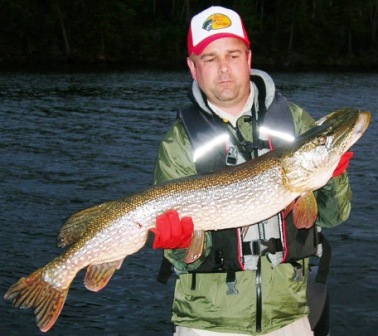 This Rainy Lake Giant Northern Pike was caught just before dark in June.  Pike are sometimes called by other slang names such as snakes, axe handles, Toothie, even snot rockets.  They are known for their large mouth lined with sharp teeth, some say their mouth resembles alligators (see pic below).  As you can see from the pictures on this page they tend to be mostly green or olive green to yellowish or brownish green with white splotches almost like elongated polk-a-dots along the sides.  Their bellies are often white to yellowish white.  Catch one of these on your northern pike fishing trip and you will hooked for life! 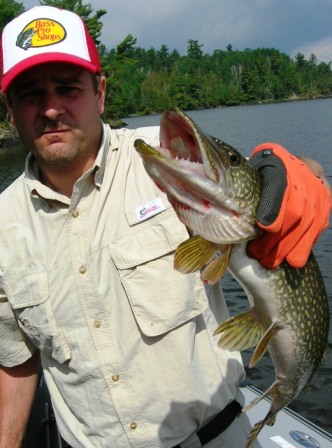 How do you tell if it is a Northern Pike, or could it be its close cousin the Muskie? If you are going on a northern pike fishing trip you must be able to tell the difference. Click on the following link to see descriptions of the muskie and how it compares to the northern pike: Muskellunge vs Pike - Identification 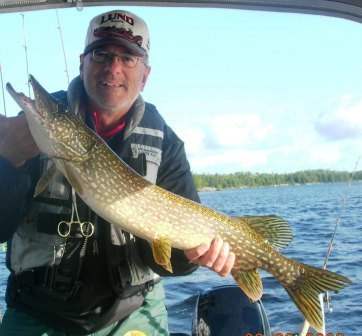 Plan your northern pike fishing trip to waters known to hold giant northern pike and you won't be disappointed!   You may not catch a world record on every trip, but you will will be amazed at the size that these pike can grow to become.  It is common to have 40 inch or larger pike in the boat.  Most anglers who search for pike often report close encounters with fish that appear to be even larger.  One such story is shared at the bottom of this page.  Because of their size and length care must be taken so as to not break their back bones when handling or measuring.  Often exhausted after their struggle, when releasing your pike you may find you need extra time to help revive them.  Notice in the picture below the hand supporting the middle of this nice pike. 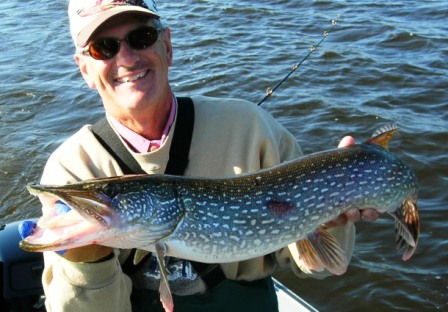 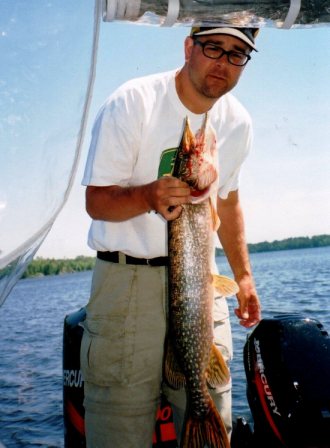 You can plan a Northern Pike fishing trip to many Canadian and some American waters.  Most of the northern states in America have populations of pike.  They can also be found in New Mexico, Kansas and Oklahoma.  There are also populations of pike in Europe, where they are often found to grow larger than in North America.  Pike larger than 50 inches can be caught.  Pike are known to eat almost anything - including fish that are hooked and being brought towards your boat, such as a walleye.  Pike have been known to strike a lure or a caught fish right at the edge of the boat, which is why when reeling in your lure you are encouraged to practice a figure eight just before lifting the lure out of the water. 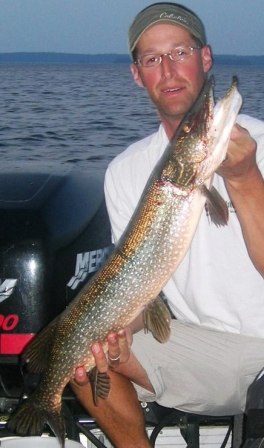 There are many, many fishing camps or lodges in Ontario, Canada.  The best way to find out about these camps if you have never been before is to attend a winter sport/fishing show at your local convention center.  Many of these camps will have representatives there to talk to and see pictures of their specific camp.  Another great way is to talk to others who have been there before.  We highly recommend Taylors Cove centrally located on Bears Pass on Rainy Lake between Swell and Red Gut Bays.  If you have not already planned your next northern pike fishing trip talk to Ed.  He is a great host, his facilities are modern and very comfortable.  You will have access to great fishing waters from there.  Taylor's Cove is easy to access just outside of Fort Frances.  Rainy is known for nice walleye, small mouth and northern pike.  There are perch and crappie as well and some nice muskie.  Ontario has a great website and you can get your license on line and order your State Card which is good for three years.  Check out their website as you are planning your northern pike fishing trip.  Contact your state's DNR for literature about the lakes and impoundments in your state to see the species populations locally.

Take Pictures!  It is almost as much fun planning your northern pike fishing trip as it is actually fishing as it is sitting around drinking coffee talking about the trip you took last summer.  In fact, we call it "Time for a meeting!"  We bring pictures, bring stories - some of which begin to take on a life of their own.  Sometimes pike are a bit greener and sometimes a bit more brown, but all times a lot of fun to catch.  They almost seem to be an "Angry Fish"  appearing to be looking at you and saying: "I want to bite your leg!"  Know your regulations, and handle all fish carefully that are over the limit as you will want to release them with out injury.

How to Catch Northern Pike

Three favorite ways to fish for northern pike are trolling large crank baits, casting spoons such as a dare devil, or casting a buzz bait.  When casting or trolling large pike tend to be holding off points of islands or shoreline.  Trolling will surprise you - try trolling past points or along uneven shorelines.  Narrows between two larger bays are always a good choice as well.  The bottom line if you are in waters where pike live be ready.   The pike in the picture above was caught by the man on the left casting into the middle of a small river inlet into the much larger English River.  He was using a green and white dare devil spoon about 3 inches.  He got the fish right to the edge of the boat and the line snapped leaving the lure in the side of the fishes mouth.

As the story goes, the anglers circled back around hoping there might be another pike holding in that inlet.  The second angler cast right to the same place with the same size dare devil only a red and white version. This is no fish story - as soon as the second spoon hit the water the same fish hit the lure.  To their surprise the  red and white dare devil was in the right side of its mouth and the green dare devil was still in the left side.  That is why this picture was taken with both anglers holding this nice fish.  This northern pike fishing trip to the English River was very successful for catching 24 to 26 inch pike.  These were within the upper limit of the slot and made for some nice eating.   On your next northern pike fishing trip try all these different methods. 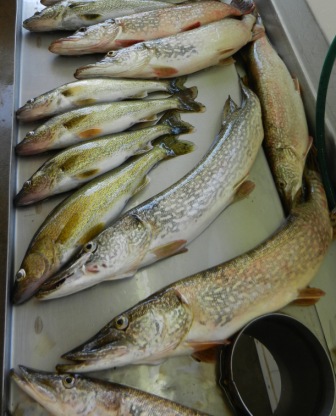 Pike of 25-27 inches are ideal for cleaning and eating.   Know your slot limits: On Rainy and on English River in Ontario these were within the slot. Taking care to remove any slime from the skin and the meat will help ensure that the meat will taste fresh and not oily.  Removal of the "Y" bones can be done after the normal fillet process, or some advocate that you cook the fillet with the "Y" bones in place which then become easily removed just before eating.  Practice will determine your preferred method.  This picture shows several pike ready for cleaning to supply dinner and some for the freezer.

This fine pike was caught the summer of 2013 in Lac Seul out of Evergreen Lodge, in Ear Falls, Ontario.  What a great fishing camp, great owners, and facilities.  Lac Seul is full of nice walleye and pike.  Check this camp out. 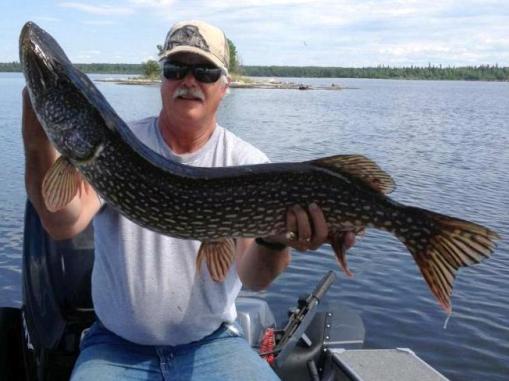