The albright knot is an easy knot to tie creating a smooth knot designed to pass through eyelets of your pole.  This knot has the ability to join two lines of unequal diameters together, or two lines that are made from two different materials.  This means it could be useful when joining a leader to a fly line, a fluorocarbon leader to braid line, or a wire core line with a monofilament line.

The Blood Knot is the another one of the fly fishing knots that is commonly used.

There are many terms used when describing tying fishing knots, marine knots, and other types of knots. Two words commonly used in the descriptions of these knots will be The working end is the end of the rope or fishing string that you are actually working with. You are usually not working with both ends of the fishing line since one end is attached to the arbor of your reel. When tying your shoes you are in reality working with both ends of your shoe string so both ends would be considered working ends. The standing end is the end of the line tied to the arbor. The standing part is the part of the line from the standing end to the knot. Remember these definitions when reviewing how to tie the 10 favorite knots shown in PFT.

Step One when tying the albright knot it to position the two lines as shown in the picture above.  Form a hook with the end of the smaller line, for example the fly line leader - in the example above shows using the green rope.  With the working end of the actual fly line, in the picture the blue rope,  pass the end over the top of the end of the hook,  Pass the end under the right hand side of the more than half way down the hook of the standing part of the green line and bring the end up and over both sides of the green rope. 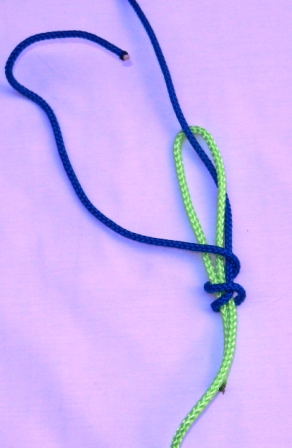 Albright Knot Step Two
Step Two when tying the albright knot is to begin to encircle the hook formed in step one. This needs to be done 8-10 times depending on how large the working line is. A larger fly line perhaps needs only 8 complete circles around the leader or green rope. The beginning of your first turn with the blue rope needs to be close to the end of the standing part or the leader. (Close to the end of the green rope.) Keep the circles of the blue rope - the fly line - pretty tight as you make your build of ten of them. With practice you will learn to feel comfortable holding all the parts of this knot. 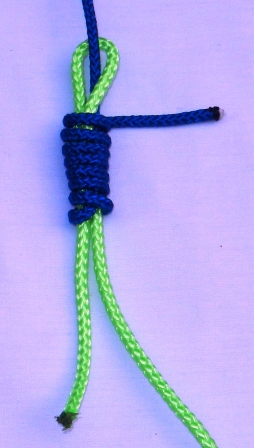 Step Three
Step Three of tying the albright knot is to complete the 8-10 circles around the green rope as shown in the picture above. It is important to end with enough line on the working end (blue rope) to finish the knot. Note in the picture how tightly the blue rope circles are against the green rope. Over time you will likely not actually count the loops but come to anticipate when enough is enough. When this knot was completed we saw that there were about 8 circles. At this point you can work to make these circles pretty tight against the green rope. also note that quite a bit of green rope end was left exposed below the knot. This is OK as any excess will be trimmed off.

Albright Knot Step Four
Step Four is the last step before finishing the knot. Pass the working end of the blue rope around, under and through the loop that has been left since the forming of your initial hook in the green rope in step one. Mentioned earlier in the last step you needed enough blue rope left after your last turn to be able to complete the knot. This is where you need it. If you don't have enough left to go through this loop then you will need to start over. Don't be afraid in the beginning to allow enough line to complete the knots. With practice you will learn to do these knots and only have to cut off 1-2 inches.

Step Five
Step Five is finishing the knot by tightening. Hold both the end of the green rope and its standing part tightly with one hand. With the other hand grab the end of the blue line and the line itself. Pull gently in opposite directions. You may find that you will need to gently urge portions of the knot in order to keep it smooth and finished looking. Note how all the parts of this knot work to both squeeze and trap the lines from coming apart. Also note how smooth the finished knot looks. Now trim up the ends that are sticking out of the finished knot - about 1/2 inch off the blue line and almost 2 inches off the green line in the picture. Pull on the green and blue ropes about as strong as a fish might pull on the line. This will demonstrate how strong this knot has become. When you do this remember what strength or weight of line you are using. If one of these is a 3 pound test line common in many leaders, you can easily break that by pulling too hard.

Back to Tying Fishing Knots from Albright Knot