Understanding basic fish anatomy will improve your ability to better clean your fish. While not all fish species will have the exact structure, most share common characteristics.  Differences in the anatomy of fish can explain some of their feeding habits and their life cycle. 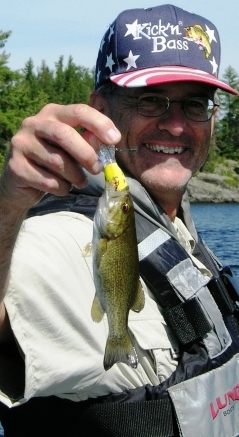 Basic Anatomy of a Fish

Highlighted here will be: 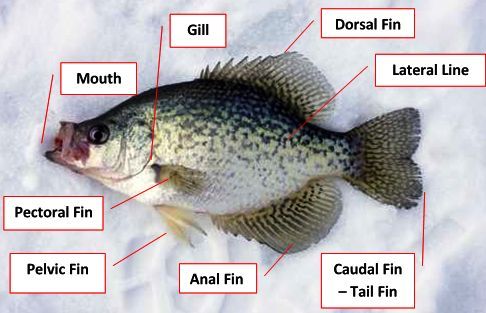 Note the external anatomy similarities between the crappie and the perch.  Fins, gill plate, tail all very similar in location.  The Perch has a second dorsal fin as you can see.  The location of its fillet is the same.  Perch fillets may be a bit thicker but of course are not as wide.  Yes they are tasty...

To the fish all of these structures are important.  To the angler note the swim bladder, the stomach and the lateral line.  The swim bladder is important to the fish because it helps keep them buoyant.  This may explain why fish seem to become more dormant and not eat as much for a time when there is an air pressure change -  like after a storm and a low pressure cold front passes through.  Perhaps it takes a small amount of time for this bladder to equalize.  Additionally, if a fish is brought up from a great depth, this air bladder can greatly expand and possibly burst which is bad for the health of the fish. 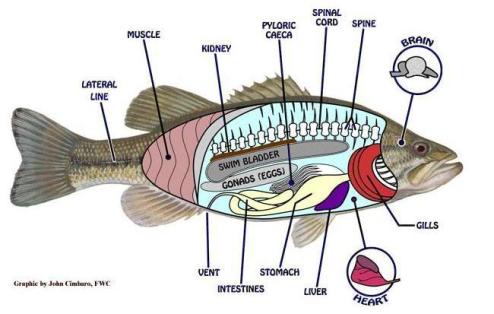 The contents of their stomach can show you what the fish has been feeding on.  It is common to find all kinds of bait fish/food in the stomach of recent fish that are being cleaned.  In the case below this pike had been feasting on crawdads.  It might be a good idea the next day to try out some crawdad lures.  In stomachs of larger fish, it is not uncommon to see other fish, as an example one 30 inch pike held a 10 inch walleye in its stomach.

The lateral line of the fish is sensory organ of the fish anatomy.  Best described as similar to our inner ear, the fish uses this organ to sense movement, proximity to objects, and in some cases fish in dark waters find their food through this organ.  If you look closely you can usually identify the lateral line as a groove on the side of the fish running from just behind the gill to the tail.

The fillet of the fish that is good to eat is the muscle that is located beneath the skin of the fish and its internal organs.  The following  outline on a crappie and a walleye shows you where to cut to remove the fillet. 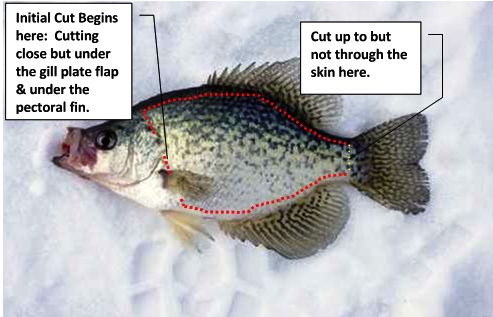 Walleyes are also noted for their tasty cheek muscles.  Noted in the picture with a red circle, you can carefully remove these using the pointed end of a sharp fillet knife.  When done properly you are rewarded with a nice round pieces of meat that resembles a scallop, and tastes wonderful.  Stan, a Lac Seul guide, demonstrated how to harvest the pelvic fins of walleye, providing a small portion of meat as an appetizer - calling them wings - bite sized morsels that are both delicious and fun.  You don't eat the fins, rather you gently suck the meat off the flat cartilage material,  Delicious!

Get The Best Fish Fillet

This is the best fillet board on the market that we have found. Helps all anglers clean their fish more consistently, harvesting more meat and less bones and skin through the entire slimy, slippery fillet process.

Back to How To Fillet Fish from Fish Anatomy