The loop formed by the Rapala knot when attached to a fishing lure allows the lure the most freedom to move,  wiggle, dive - in other words to do what it has been designed to do.  You will find instructions how to tie this knot in every Rapala Lure you purchase.  Staff at PFT have used many Rapala Lures over the years  and recommend you check them out at the advertisers on this site.  Many game fish will hit these lures inclkuding great success in Canada for Walleye with the Rapala Deep Tail Dancer in Purple Flash and Bleeding Tiger.

There are many terms used when describing tying fishing knots, marine knots, and other types of knots. Two words used in the descriptions of our favorite knots will be The working end is the end of the rope or fishing string that you are actually working with. You are usually not working with both ends of the fishing line. When tying your shoes you are in reality working with both ends of your shoe string so both ends would be considered working ends. With fishing line you normally have one end you are working with and the other end is usually fastened to the arbor, hook or lure. The standing end is the end of the line tied to the arbor. The standing part is the part of the line from the standing end to the knot. Remember these definitions when reviewing how to tie our 10 favorite knots.

When beginning to learn to tie fishing knots, you will need to learn to leave enough extra line on your working end to finish the knot.  With practice you will learn to estimate this very closely.   As you progress through tying the knot you will quickly learn to tell if you will run out of line on your working end.  Sometimes you will need to just start over because you will not have started with enough extra line on the working end to finish the knot.  The rope used in these pictures is of course much bigger than fishing line -  as a result the knots in these pictures are much bigger than you will make with your fishing line..  When done tying any knot trim any excess line on the working end so that it will not be in the way.

Tying The Rapala Knot: Step One 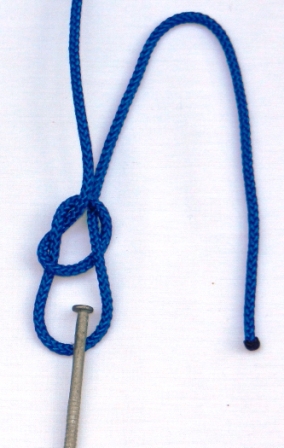 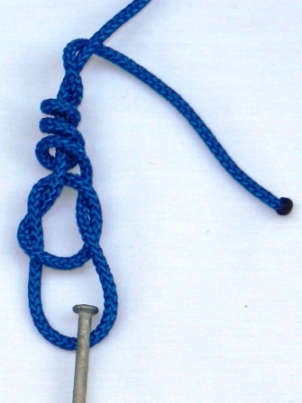 Step three of making this knot requires you to pass the working end over the top and around the standing end of the rope close to the overhand knot.  This begins a circling process you will see in the next step and picture where you will make 3-4 passes around the standing part of the line.

Step FourStep Four is the making of additional passes around the standing part of the line so that you end up with 4 loops or rings around.  Note in the picture the working end now has about 1-2 inches left exposed.  This is important because in the final step you will pass this working end through the eye or loop of your overhand knot to lock the knot in place. 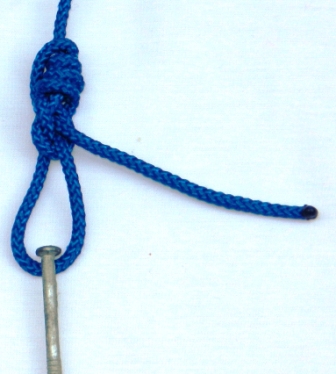 Final Knot
Trim the excess of your working end close to the knot. Good work!

Here is a great resource for your pocket, tackle box or boat.  You will likely learn to tie many of these knots from memory, but having this resource available often will come in handy.  Click on the link below.

Back to Tying Fishing Knots from Rapala Knot