How To Catch Crappie

To understand how to catch crappie you first need to get a basic understanding of their spawning cycle, their habitats and their community characteristics. Springtime brings the crappie spawn.  The first picture shown below an angler holds a nice crappie caught  in early May in 18 inches of water near a fallen tree on Truman Lake.  Water temperature in that cove was about 60 degrees. 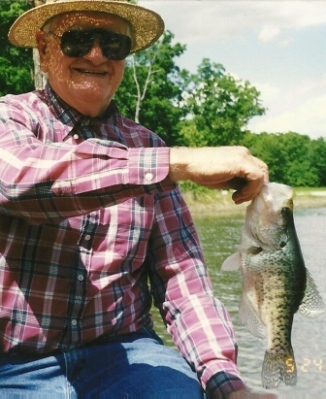 There are two common members of the crappie family:  Black Crappie and White Crappie.   Their colors are very similar but differ in patterns.  Both are primarily white to silver underneath with dark to light green colors.  They also differ in how their dorsal fins develop.

The Black Crappie features rather random very dark to dark green splotches in no particular order as seen on the KSDWP website's link below..  The black crappie has more spines on the dorsal fin than the white crappie, usually 7 or 8.

Click on the following link from the state of Kansas KS KDWP Fish Identification provides a great resource of fish identification.

The pattern on the White Crappie is more distinct:  its blotches make up what appears as vertical rows or bars as seen in this picture.  The dorsal fin in the white crappie has only six spines. 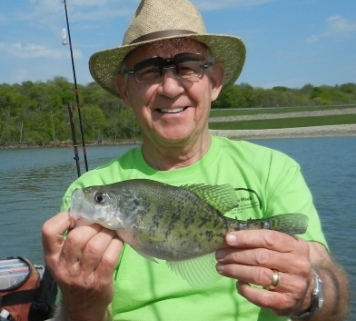 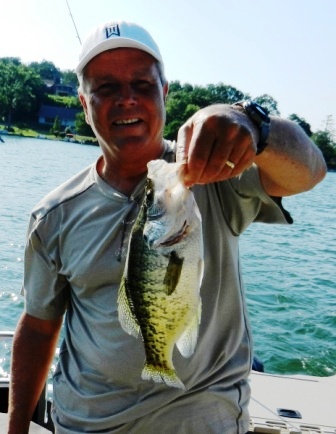 Understanding how to catch crappie tip number one:  Fish where the crappie are.  In the spring when the dogwood bloom, crappies begin to bite.  This saying/legend is a wonderful saying, but is reliable when you factor in that dogwood trees bloom in spring, water temperatures begin to rise and daylight overtakes darkness.  The crappie spawn can be traced to water temperatures that reach 56 -60 degrees.  Shallow coves will warm up first.  The actual spawn is not one day but a process that begins with the males and females having a period of days to a few weeks where they begin to eat a lot more and move to shallower areas.

Spider rigging has become a very popular way of jigging for crappie.  Many anglers will use 2 of the 4 pole rigs and have 8 or more poles with minnows or minnows and curly tales on each pole.  In season the action can be constant.  We have experienced limits for 2-3 anglers in less than 3 hours.  These are nice sized keepers!

This feeding "frenzy" sounds the start for how to catch crappie tip number two.  Crappie prefer to spawn in water that does not have a muddy bottom but has sandy to gravel bottom, usually in 1-5 feet of water and this feeding begins their movement to those locations.  Along these types of shorelines also look near a fallen tree where there is some shelter.  They prefer to not be in water with heavy current or large waves.  In some cases you can actually see the crappie on or near their nests.  The males will usually be the ones who stay by the nests and guard them.  The picture of angler holding a nice crappie caught in 2 feet of water of a shallow cove on Truman Lake.  Fishing from a boat and flipping a slip bobber holding a minnow on a hook about 12-18 inches below the bobber stop.  This can be a very effective technique.  Also try casting shallow diving jointed minnows in shallow bays during this time. 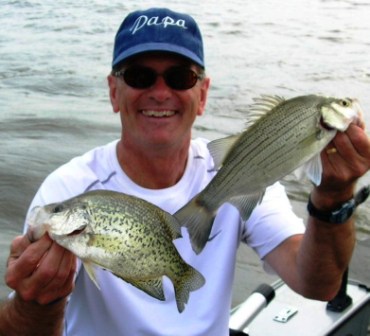 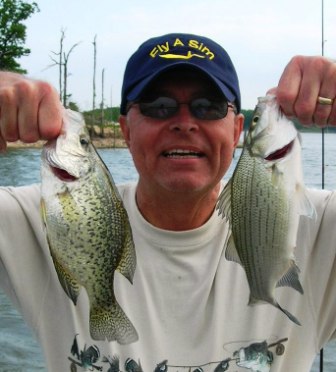 Trolling: How to Catch Crappie Tip three.  These two crappies were in transition between early spring and summer patterns.  They were caught trolling for white bass in fact caught at the same time as a white bass.  Both were on or near a 10 foot hump or saddle while we were making several passes.  Several crappie and white bass were caught on these passes.  We were using crank baits and spinner baits.  Crappie can often be found in trolling patterns all year long but in larger numbers during these transition periods. 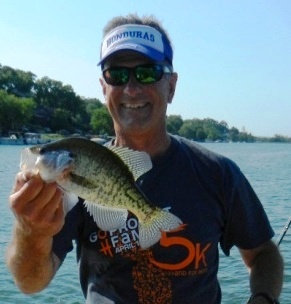 Some lakes with minimal bottom variation will produce crappie trolling all summer long.  Summer times offer how to catch crappie tips number 3 and 4.  Don't be surprised when trolling to catch crappie.  Additionally,  in the summer crappie often seek structure.  They find this on reservoirs in flooded timber especially flooded cedar trees.  Observe crappie in aquariums in sporting goods stores and you can begin to visualize how they do this.  In some waters local residents will sink pine, cedar or Christmas trees to create crappie habitat.  If in doubt hire a crappie guide and remember how they find their crappie.  Don't overlook flooded hard woods either.  Crappie guides will move from hard wood tree to hard wood tree once a nice crappie is caught.  If none is caught after 3-4 tries not much additional time is spent on that tree before moving to the next tree.  Try different depths until you find the pattern.  Usually you will find them 10-15 feet down in 15 - 20 feet of water close to a creek channel.   Seek local advice from bait shops for depth and locations. 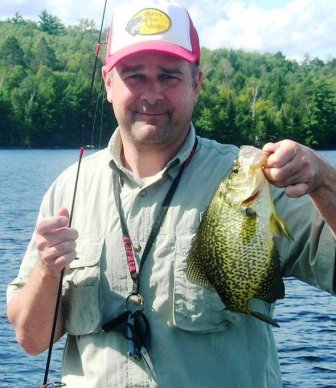 How to catch Crappie in structure.  Even in Summer, crappie suspended in structure like a cedar tree or a sunken Christmas tree can produce multiple nice crappie.  This rainy lake crappie along with many others came from such an underwater habitat we found on Rainy Lake.  This sunken cedar tree structure appeared to be nearly 12 feet off the bottom and nearly 15 feet in diameter.  All three anglers in the boat caught limits of crappie on this structure.  A local bait shop suggested using slurppies which were productive in 3 different colors.

How To Catch Crappie 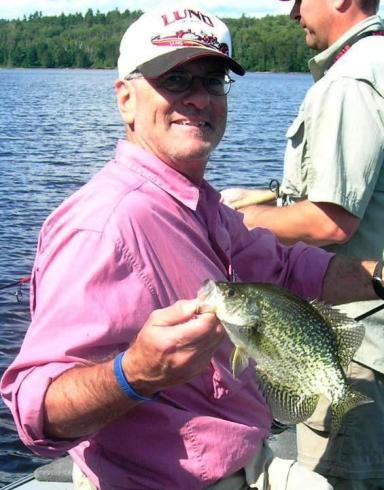 Crappie are caught jigging with minnows, plastic curly tails, tube jigs and more.  Crappie can be caught casting spinner and crank baits.  The sizes of most artificial baits are smaller - 1/8th to 1/4 ounce jigs for example.  Colors vary and different days may call for different colors.   The crappies above were caught jigging over structure with a 3/16th ounce weighted slurppie.  Many anglers have found long jigging poles (9-12 ft long) as their answer to how to catch crappie.  These make it very easy to jig from tree to tree straight down, and quickly repeat the action or move to another tree.  When you feel the crappie bite you simply lift the crappie up, out of the water and into your boat. 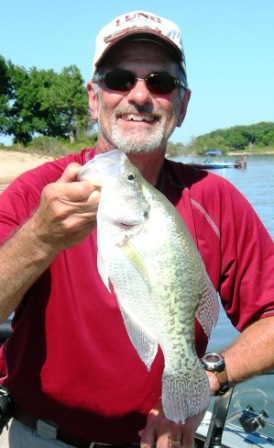 This crappie was caught in the summer on Lake Texoma trolling a crank bait over a hump.  Crappie have large mouths and are great eating.  Their clean, white meat is sweet with virtually no fishy taste.  In general, crappie are easy to clean or fillet.  Care must  be taken so as to not cut too quickly  because you can easily pass through the back bone and some flesh may be lost. 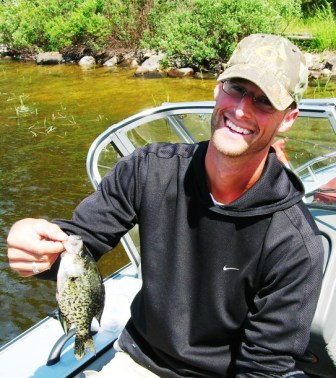 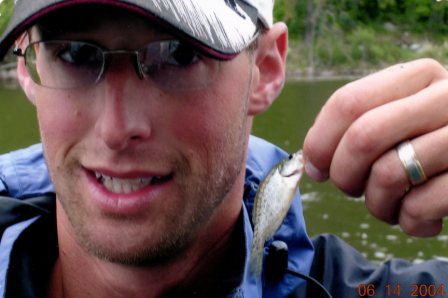 While jigging for crappie on Rainy Lake over a sunken structure, this angler saw this small crappie swimming between our main motor and the kicker motor right up next to the boat.  It looked like a baby fish swimming next to its whale momma (the boat).  He picked up the fish with a minnow net in order to tell exactly what kind it was.  Clearly it had the marking and shape of a crappie.  Too small to fillet - this crappie was released to live another day.  This does not qualify as an official "How to Catch Crappie" tip, however! 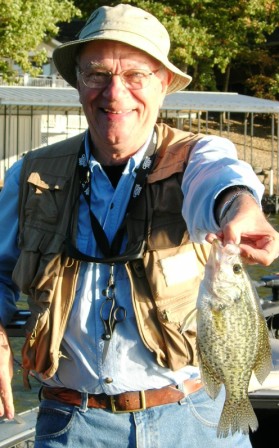 Crappie With a Good Friend

This nice crappie was caught at Lake of the Ozarks. We had a great fishing trip, what is it about catching fish that makes a man smile? 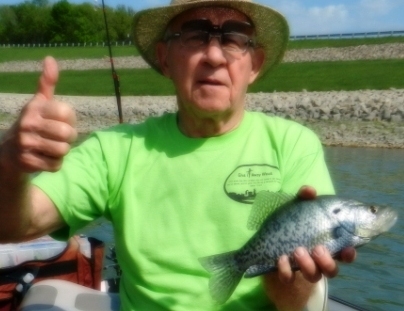 Jerry Gives a Thumbs Up 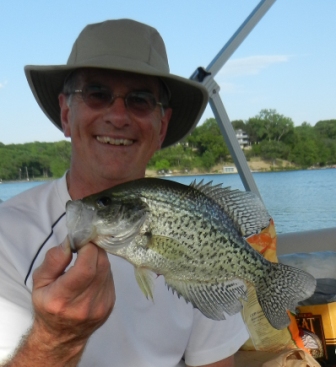 Back to Freshwater Fish Identification