Who are ice fishing anglers:   men and women of all ages!   Simply, it is anyone with a desire to catch delicious tasting fish and see the hard water and cold temperatures as big adventure.   Fish have to make a living every day - which means that they have to eat every day.  So all through the winter there are fish to be caught. 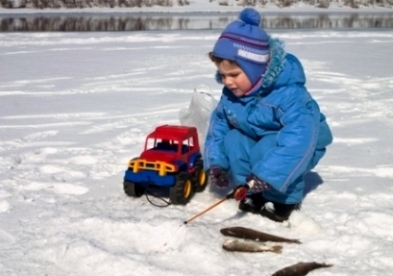 A favorite of our staff,  note this young man and his concentration and his success - just throw your caught Fish on the ice, you don't have to take a cooler with you, you have one ready made -   It doesn't get better than that.  Of course, this young man has his truck ready just in case the catching  slows a bit and he gets bored. 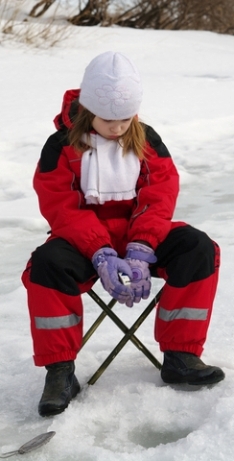 It does not make matter, ice fishing anglers can be male or female, younger or older. This picture is a great shot of a young lady watching closely for a fish to strike.  This brings us to the question:  What does it take to catch a fish while ice fishing?  Concentration for one things as shown above...The following shots show more ways/ideas to catch a fish through hard water...

Is This Angler Napping? 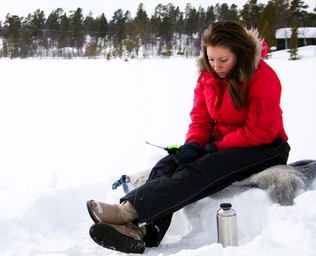 Be Sure to Check Your Bait 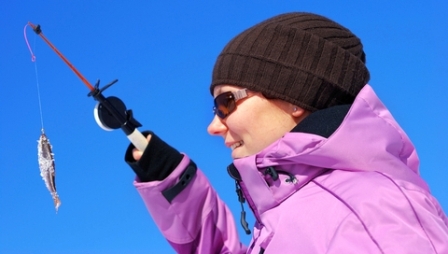 You May Need Two Rods

With persistence, concentration, the right bait, the right location, warm clothes, you are rewarded with nice fish! 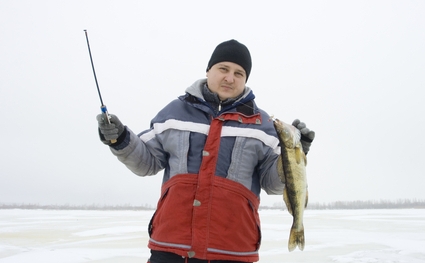 George fished his entire life.  He never turned down a reason to go fishing, Including when the water turned "Hard"!  His spoken reasons why he loved ice fishing paled in comparison to the look in his eyes and how he lit up when he talked about fishing especially Ice Fishing!  Here are George's reasons to ice fishing?

For many, fishing ends when the water turns hard.  For ice fishing anglers, the adventure continues - the only change is the equipment including more layers of clothes that they choose to wear.  As with any fishing trip an adventure on Ice requires planning, some local knowledge and at least some Ice Fishing Equipment.  What follows is an ice fishing story about George who spent over 30 years as an ice fishing angler, his last outing coming when he was 89 years old.  As told by a staffer at PFT... 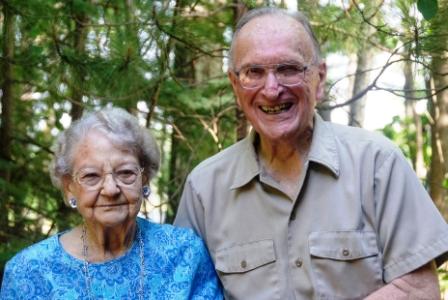 Uncle George graduated from seminary with my dad.  Both were great Fishers of Men for over 40 years.  Both also shared numerous fishing for "fish" experiences and along with my Cousin Mark, fostered a love of fishing in their sons.  After over 40 years in full time ministry Uncle George retired to a home on a lake in northern Wisconsin just outside of Rhinelander.  Though retired from paid ministry, he and Aunt Dorothy became very active in their local Church in Rhinelander.

Settling in as full time residents near Rhinelander, they were surrounded by hearty souls who fished all year round, including many ice fishing anglers who routinely dug holes in the 2-3 feet of ice in search of the hidden wonders below. During this time he joined a group of men from the area in making an annual winter trip to Lake Winnibigoshish near Bena MN for an ice fishing adventure.  The crew was made up of friends, neighbors, and members of men's group at Church.  John, a retired police officer was the official leader of the group, we will call him the Chairman.  The chairman would select the date for the trip, reserve the camp, and arrange for the vehicles to transport the men.  Although every man contributed, it was the Chairman's job to organize the trip and to insure that sufficient food and gear was available for the trip.

For nearly 30 years, the same core group of ice fishing anglers traveled across northern Wisconsin into Minnesota to a fishing camp called Nodak Lodge on Lake Winnibigoshish, MN.  Located on US Route 2 near Bena, MN  Nodak Lodge is a family owned camp.  Originally opened in the early 1950's by the Kline family, it has been handed down to two generations.   8-9 ice fishing anglers made this trip traveling in 3 pickup trucks with all their gear.  Once they arrived, they unpacked, ate dinner, and then had a meeting with the camp directors.  Important topics to be discussed included where the fish were biting this year and what the weather forecast was for the week.  With this information in hand they were ready to settle down for a great night's sleep. 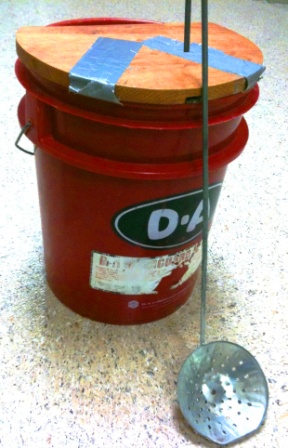 Uncle George's Ice Fishing Bucket
After a hearty breakfast of bacon and eggs, they drove their trucks out onto the ice to the approximate locations given them by the camp director. Once they got close to the hot spots, they spread out and began to drill their holes. They used their sonar units to measure the depths and drilled 12-15 holes. Each man fished two holes and if unproductive would drill new holes and move on. It sometimes was a race to see who could get their line in the water first.

If the wind was blowing they would position their trucks to form a wind break.  Uncle George always took his 5 gallon bucket to sit on.  However, he preferred to stand, especially when the bite was on.  The anticipation waiting for the rod tip to come crashing down seemed even greater than when fishing in the summer.  He could hardly wait to set the hook.

Temperatures were generally in the single digits to about 20 degrees sometimes with wind.  This meant layering up, wearing long johns, snow mobile suits, insulated boots and insulated gloves.   The warmer you kept your whole body the warmer your hands would stay.  Some would use small hand warmers.   Nevertheless, when it came time to handle the fish, you somehow forgot how cold it was and just got after it. 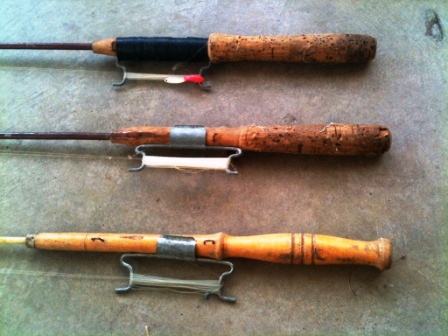 When asked what memories really stuck out from all these trips, besides what has already been mentioned, Uncle George started laughing and said, on occasion the wind would whip up and send our buckets down the ice and we would have to chase them down. He then asked me if I had ever seen ice buckles? Sometimes he said these ice buckles were up to six feet high and when driving to their fishing spots they had to make wide sweeping arcs around them. In the mid 1990's Uncle George and Aunt Dorothy moved to a retirement village in Franklin Indiana, yet George continued to make the trip north to join this group of ice fishing anglers for their annual Ice Fishing Adventure. His last trip was in 2009, when he was 89 years old. So why do ice fishing anglers do this, including someone who was approaching 89 years of age? When I asked Uncle George if it was because of:

Whatever the main reason, you should consider joining a group of ice fishing anglers.

Lake Winnibigoshish also known by locals as Lake Winnie: is the fifth largest lake in Minnesota and covers 67,000 acres.  Over 140 miles of shoreline, Lake Winnibigoshish is part of the Mississippi River Flowage, and actually empties into the Mississippi river. The lake features excellent Walleye, Northern Pike, and Yellow Perch fishing. The following link takes you to the DNR of Minnesota and shows a topo map of this fine fishery. Lake Winnie Topo Map

Nodak Lodge is a premier family, fishing and hunting resort located on the south shores of Lake Winnibigoshish in northern Minnesota's Chippewa National Forest. They offer comfortable modern cabins and motel rooms plus a fully-equipped campground year round. They are knowledgeable of the lake and its fishing secrets and offer a full range of fishing and boating services to explore the entire lake. They have hosted scores of summer anglers as well as ice fishing anglers.

Nodak Lodge was started in 1953 when the Kline family moved there from Streator, Illinois. Their sons thought they had died and gone to heaven, being able to hunt, fish, and enjoy the north woods. They have cared for the lodge through many building projects, charter fishing & featuring great hospitality, because of this the resort has flourished and many guests have returned year after year. The oldest son Bob and his wife Sandy took over the business in 1982, raising their family and continuing to uphold the lodge as a place that people enjoyed coming to.  In 1996, Bob's daughter Melissa and her husband Roger along with their 3 boys Tyler, Travis and Truman began to run the resort. They continue to make Nodak Lodge the place to come home to in the Northwoods.