Shimano spinning reels capitalize on over 80 years of building world class gears for cycling and fishing.   A Shimano reel purchase will provide you a lifetime of pleasure and comfort while fishing.  You will not put in your hands a better feeling, smoother working or stronger spinning reel than one made by Shimano - you won't be disappointed.

There are a number of features you should become familiar with when reviewing Shimano Spinning Reels. Not all inclusive these are some of the more noteworthy. They include:

This anti-reverse feature means that a one-way bearing is placed to prevent the reel from having any back play when hooking a fish. Hook setting is instant which is really important when jigging. On reels with the trigger release system the reel will turn up to a half turn to get the bail back on top for the next cast.

The smoothness and lack of wobble of Shimano Spinning Reels is a result of the Fluidrive technology. Using a computer model to balance the rotor similar to balancing a tire, the result is a smooth rotation allowing the angler to focus on retrieving their catch. This is the first thing I noticed when I began to explore Shimano Spinning Reels at sporting goods stores - send the crank spinning and you will see what I am talking about.

You should also notice a remarkable smoothness in the casting of your line from a Shimano. Much effort has gone into making all the parts of the spool/bail mechanisms load and unload the line with less friction and twist. The results are casts as long or longer than you are used to and less knots forming. The newest innovation is improving the propulsion spool lip which has been shown in testing to result in longer casts with less backlashes and less friction. You will notice longer casts and less line bounce when coming off the spool. This addition makes the new Shimano Spinning Reels better than ever!

This innovation is all internal but has resulted in stronger, smoother and longer lasting gears. Based on cold forging technology, Shimano has been able to make these gears and bodies stonger, with micro-tolerances that result in reels that do not warp when under stress, and the ultimate in gear smoothness, strength and quietness. For those who use their reels on a daily basis, this is one feature to look into, resulting in Shimano Spinning Reels that maintain their "out of the Box" smoothness for a longer period of time.

A-RB bearings (A-RB= Anti-Rust Bearings) have been added to many Shimano Spinning Reels. Important for fresh and saltwater applications, this process results in a bearing that is 10X more corrosion resistant than standard stainless steel bearings.

This Aero Wrap II technology results in a unique pitch designed to create oscillations speeds that are ideal for the new lip design. The technology also results in a more uniform line wrapping and line lay which means that there is less loss of energy when casting when compared to their own previous well working systems - Longer casts with even less effort. Not available on all models, Shimano Spinning Reels that have this feature may be of great help for anglers who earn their living fishing all day.

Shimano Spinning Reels are known for their direct drive mechanisms. Designed so that the handle is directly connected to the drivetrain - increasing the power transmission and eliminating any feeling of play in your retrieve.

The Sahara 2500 front drag reel is a show stopper.  Modest price for all the features you get from this great reel.  With a gear ratio around 5:1, and a 29 inch line retrieve per crank you can put a strong smooth reel in your hand to fight the most common fresh water fish you catch.  A 20 pound drag help prolong your fight for the larger fish.  Weighing in at just over 8 and 1/2 pounds you will feel comfortable fishing all day.  Read more about the Sahara at the following links.

The Sedona reel has been updated this year to include their new HAGANE gear system, making it stronger, smoother and quieter than ever before.  Priced at an entry level for a great first spinning reel.  Another prominent feature is the propulsion line management system that results in longer casting while at the same time helping to prevent backlashes.   Sedona has been tested and approved for use with Mono, FC, and their PowerPro Lines.  The power you need in a smooth drive.   Click on these links to read more about the Sedona. 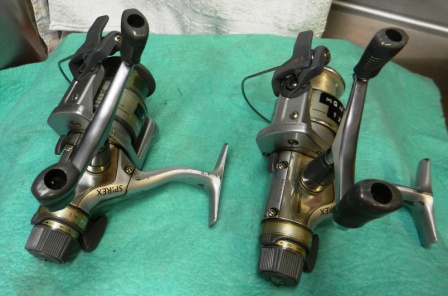 These two Spirex RD 4000 reels shown above are over 20 years old.  They are still in good working order.  The updated Shimano Spirex have been improved in several ways:  the new Propulsion Spool Lip, Quick Fire II One Handed Casting System, Varispeed Oscillation, 5 Shielded Stainless Steel Ball Bearings, Fluid Drive II, Dyna Balance,  and is approved and rated for Salt Water, Mono, FC, and PowerPro.  Available in the 1000, 2500, and 4000 sizes with line retrieved in inches:  28, 32, and 33 inches respectively.   The one hand casting feature is great for casting lures.  For jigging a Shimano without the trigger system with the Super Stopper II system may be more ideal.

This impressive reel is made of a new composition which is called Carbon Interfusion (CI).  This carbon reel is 1.5 times stronger than conventional graphite yet much lighter than other metal reels.  The (4) is simply the number of electrons in the Carbon Atom.  This all means that this lightweight reel is stronger and lighter and can be made with a high degree of precision.  Other features packed into this mighty lightweight reel are:  HAGANE Gear system, Propulsion Line Management System, Aero Wrap II Oscillation, 6 S A-RB Ball Bearings, Aluminum Spool, DD Mechanism, WP Drag, Fluidrive II, Floating Shaft, Dyna Balance, Super Stopper II, and a repairable Clicker.  You can't get a much better reel for finesse fishing.  Reasonably priced with all these features:  Available in several sizes including the 1000 up to the 4000.  This reel is perfect when paired with a strong sensitive rod for fishing for trout or walleye.

Just when you think Shimano couldn't pack any more features into their reels, they have raised the bar with this Sustain FG Reel.  X-Ship is a feature that improves the ease of cranking through increased torque due to a bigger diameter drive gear.  Additional modifications to the drive train reduces the pressure when under stress.  Also included in the Sustain are:  A new Magnumlite CI4 rotor for models 4000 and below, Rapid Fire Drag, HAGANE body and gears, Propulsion Line Management, Aero Wrap II, Eight S A-RB Ball Bearings, Newly Machined Aluminum Handle, EVA Handle Knob, Waterproof Drag, Maintenance Port, Fluidrive II, Floating Shaft, Dyna Balance, Super Stopper II, Repairable Clicker and a "Kick Stand" for use when laying your rod and reel down for holding it up to prevent scratches.  Sustain is available in Seven sizes from 2500 to 5,000.  The new carbon drag can handle up to 24 lbs.   Sustain is a big-time reel for bigtime anglers.

If you fish a lot you will want to pick up the StellaFD reel and check how it feels in your hand.  Shimano has packed virtually every new feature/technology that they have introduced into this outstanding reel.  Fourteen S A-RB Ball Bearings - means this reel is an ultra smooth operator;  X-Ship Double Bearing Pinion Gear increased the gear efficiency and its power - combined with the Micro Module Gear system means that you can really take control with confidence and reliability when you hook into the next "Big One".  Including the Direct Drive System where the handle screws directly into the main gear means Stella is stronger and more durable than anything you have used before.

Other features include:  AeroWrap II Oscillation for uniform Line Lay, Dyna-Balance, Super Stopper II, Magnesium Frame for stability and light weight.  The Stella takes advantage of the full Propulsion Line Management System, including adding a cold forged Machined Aluminum Spool with a Titanium Lip - adding precision, distance and extra smoothness to casting and retrieving.  This reel costs a bit more, but for the tournament pro, or the amateur who fishes every week, you have got to try this one out.

The Stella is available in 4 sizes:  The 1000, 2500, 3000 and 4000.  You will be impressed by its light weight, even of the largest reel the 4000. At just over 9oz the StellaFE 4000 weighs 4-5 ounces less than comparable sized reels.   With a gear ratio of 6.2:1 this Stella 4000 reel can make the work of some of your largest fish one of confidence and pleasure.   The Stella has packed nearly all of the top features from all the Shimano Spinning Reels.

Back to Shimano Fishing Reels